Samuel P. Huntington in his seminal work The Clash of Civilizations released in 1993, claimed that “the fault lines between civilizations will be the battle lines of the future.” This trend of thought inevitably caused debates for generations to engage in the ensuing decades. He maintained that the world would be divided into eight civilizations namely, Hindu, Islamic, African, Latin American, Japanese, Slavic Orthodox, Sinic, and Western. On this basic of division based on various factors of cultural and religious identities, he argued that any conflict that would arise in 21st century CE would inadvertently be a result that stemmed from the divergent ideologies that he envisaged. While he was criticized on the account of being too general in his idea of the demarcation of the globe into static versions of civilization that were never-changing and easily identifiable, the concept to a certain degree does showcase the rising phenomena of radicalism and growing differences between civilizations in the globalized world order. Even though the transition from the Cold War to the current period may not have panned out exactly as Huntington hypothesized, one may observe that the 21st century has been riddled with friction that resounds within the interconnected web of state relations.

South Asia constitutes of states that are linked by a string of historical parallels but also have disparate identities that play into not only the socio-economic interests of the people but also impacts the political actions of the state. Radicalism, particularly religious fundamentalism, has plagued the region with uncertainty and the actions of specific groups sprouting the notions have made it a concern for all the states in South Asia. This article focuses on the religious radicalism that has been a persistent issue for the countries. The United Nations Human Rights Office of the High Commissioner (UNOHCHR) in 2016 released a statement whereby the basis of fundamentalism, religious or otherwise, arose from the desire to remain attached to the literal meanings of the values that they pertain to. This exact desire turns into a form of extremism when violence is utilized as a tool in order to ascertain or protect those values from perceived threats.

Historically, foreign powers that moved into the region, whether they be Mughals or colonial powers came with their respective religious goals in mind, that lead to an opportune environment for the seeds of religious fundamentalism to be planted. In the contemporary era many fundamentalist groups have gradually started to oppose modern beliefs and specifically the principles of secularism that have been supported by the majority of the international community and certain influential nations.

The Global Terrorism Index (GTI) 2018, issued by the Institute of Economics and Peace listed the surmounting threats that South Asia faced as a whole, with Bhutan remaining as the only country that laid low within the index, and Sri Lanka as well as Nepal stepping a few notches down from the previous years. Things have changed quickly in the following years of the Report as Sri Lanka suffered through a series of devastating acts of extremism. 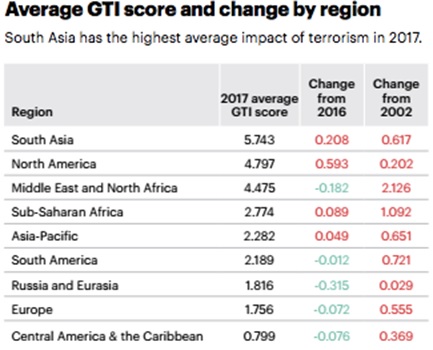 Source: The Global Terrorism Index 2018, The Institute of Economics and Peace, page. 34.

The Index presents the magnitude of insecurity that the region faces, especially since India, Afghanistan and Pakistan all rank amongst the top 10 most vulnerable states in the world. Throughout the annual series of the GTI publications, religious extremism has been listed to be one the major causes of terrorist attacks. According to the 2018 research, the extremist groups have further been able to utilize the digital platforms to cement and effectively disperse their idea of “Us versus Them” throughout the globe, within which South Asia has become one of the key battle spaces for reinforcing such activities, after the Middle-East and North Africa (or the MENA) region. These ongoing transformations have enabled such ideas to gain momentum in a manner that has rarely been witnessed before in such a short time. In the past, the growing radicalization in Maldives has prompted young people to enlist themselves in jihadist organizations steadily through the use of social media. This can be seen as an incident amongst many where religious fundamentalism, and the desire to remain true to the perceived sense of the principles based on faith have spurred a regionally interconnected network of groups that cannot possibly be contained by the actions of one state alone. This process of recruitment serves as a reminder that religious fundamentalism in one state can result in security concerns transcending beyond traditional borders.

The recent crisis in Sri Lanka where a series of bombings took place on April 21, 2019 that targeted Churches and hotels causing fatalities and injuries pointed towards an act of violent extremism. Such an attack of the reported scale had not been experienced in a decade within the nation. Several international media sources have since then claimed that according to state authorities certain radical Islamic groups have been identified as likely perpetrators. In addition, Pakistan alone in the region has suffered from two major bombings in Lahore and Quetta as a result of fundamentalism that rooted in sectarian violence. While these incidents have so far been restricted within state borders, there might always be a lingering concern when the spread of ideologies create situations that lead to risks for the entire region, as religious heterogeneity is one of the defining traits of the collective people of South Asia. Fundamentalism is not an attribute of a particular religion, but fundamentalists who adhere to their respective religions in South Asia have been known to exhibit extremist tendencies, often bolstered by the proclamations of certain leaders in power, who have openly spoken out against secularism. The agitation against the minority religious groups in the states have created a riptide of fundamentalist views that feed into the nationalist agendas, staging a delicate situation ripe for any future intrastate or cross-border violence. An example can be that of the fear that minorities are facing in India due to the growing volatility of the Hindu fundamentalist movements. Under the present government, communal violence in India rose by 28% from 2014 to 2017 alone. Similar crises have been witnessed across the borders of Pakistan and Afghanistan as well.

The rise of religious fundamentalism can have profound effects on the political forces of the states. What starts with community affects people on a domestic level and may cause a ripple effect within the state institutions. Myanmar in Southeast Asia, for example, faced a similar problem of the utilization of religion as a tool for political coercion, which resulted in a massive genocide and displacement of a large population of Rohingya Muslims. This not only affected the people of Myanmar but also strained the resources of Bangladesh where the people were provided refuge.

Small states like Nepal, Bhutan, Sri Lanka and Maldives lack relative capabilities to deal with such spillover effects of religious fundamentalism compared to the greater powers in South Asia. The need for a united regional security paradigm is essential for the purpose of collective peace when the threat comes from empowered groups that draw their inspiration of violence from ideals that ultimately affect the masses who are not a part of such fundamentalist agendas. No nation-state today exists in isolation, and repercussions are widespread. The only organization that connects all of the states is the South Asian Association for Regional Cooperation (SAARC) that lays largely dormant. As states are eagerly engaging with other countries to associate with regional organizations like BRI, Indo-Pacific, BCIM, Shanghai Cooperation and such SAARC remains as an underutilized opportunity that could pave a way for easing the security tensions in the region that arises from religious differences. Reflecting upon the incidents caused by extremism in 2019 alone could make future SAARC summits a suitable platform to interact and formulate agendas to deal with this pertinent issue that has been affecting the lives of many in South Asia.

Teaching Faculty at the Department of International Relations and Diplomacy, Tribhuvan University.